Jewelries are adornments worn by people on their body or in their clothing and are usually very small ones and have a light weight. The traditional ones people usually see and wear today are made of metal with a gemstone placed on them. This is what most individuals in western countries wore and have been adapted by other places around the world.

But there are is another kind that is based on the culture and tradition of this other places which is being called tribal jewelry. An example of these is the Kuchi jewellery which what is being worn by the nomadic people living in Central Asia. They freely travel across international borders for several centuries.

Their adornments are well known for their flamboyant spirit, exuberant designs and vibrant energy with over the top color and embellishments. Some consider this as extravagantly showy or bright and appear tasteless to them but these what make others recognize as Kuchi. Wearing them is popular for daily wear but specially when dancing with the combined vitality of their multiple cultures.

But you may be wondering what makes a tribal jewelry unique from the common versions worn by almost everyone. The basic difference is that these were crafted by indigenous tribal artisans with the use of local materials. These adornments have cultural meaning which is significant for their wearer with authentic pieces being vastly different with those found in stores.

They rarely have a uniform shape or be symmetrical exactly with local materials varying in quality and content among different artisans, cultures and time. Considerable wear patterns, broken sections, missing stones and debris clinging still to them are possible due to them being displayed in local markets. Most of them have been passed from different generations and various villages.

Artisans choose the materials they will use carefully and this is based on their tradition, availability and symbolic meaning. Silver is their usual choice for metal while gold are sparingly applied and combined with colorful gemstones and objects. Examples of these added colors are from coral, carnelian, lapis lazuli, turquoise, pearl and even bone.

There are various reasons for these people to wear them with the most basic one is being an addition to their beauty or adornment. However, the idea of beauty is different from each group and what one considers beautiful may not be for others. It also has the flexibility of being worn in different ways like from a necklace into a headpiece.

They could also show the wealth of a person and can be converted easily into currency or used in barter directly. Men are the ones who commonly make them but the women are the actual owners to act as the keeper of the fortune of their family. These provide the family a cushion in avoiding financial ruin during the time of crisis. And when prosperous times return, they would then replenish their jewelry supply. 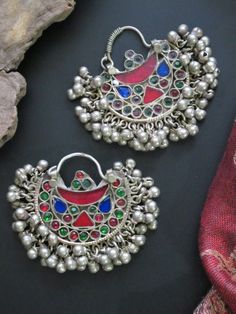 Another common reason for wearing them is to symbolize their status in the community. This helps people identify if that person is a royalty. It also lets people know if that woman is eligible for marriage or have already been married.